A lecture is to be given in Parton Kirk on November 5th in memory of one of the world's greatest scientists, who is buried in the kirkyard there. It's the start of a new initiative which it is hoped will lead to a permanent centre to highlight the life and work of James Clerk Maxwell. 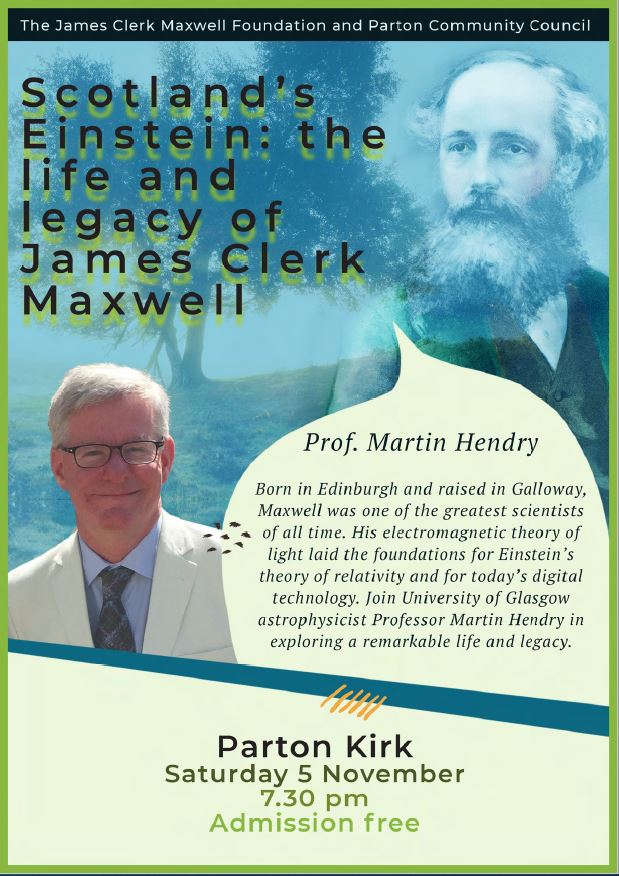 The title of the lecture - "Scotland's Einstein" - sums up the extraordinary level of Maxwell's achievements. "He developed the theories that explain light and electromagnetism," says the speaker, Prof. Martin Hendry of the University of Glasgow. "Maxwell's revolutionary discoveries paved the way for technology that is fundamental to life today, from bluetooth to broadband, from mobile phones to microwave ovens. He was the father of electrical engineering and even created the first-ever colour photographic image.

"As if that weren't already enough, he also laid the foundations for Einstein's theory of relativity, but achieved all of this while remaining gentle, thoughtful, humble and good-humoured to the last."

Prof. Hendry, who holds the chair of Gravitational Physics and Cosmology, is a senior member of the international collaboration that led to the discovery of gravitational waves, confirming Einstein's prediction of their existence. He is also the university's Vice Principal (Academic Services) and one of Scotland's most active science communicators.

He will give his talk in Parton on the anniversary of Maxwell's death on 5 November 1879. Maxwell himself, born in Edinburgh, was raised on his father's estate at Glenlair, where he spent part of his adult life and indeed it was there that he wrote his paper with the equations that encapsulated the nature of light as electromagnetic waves. Eight years after his death - when only 48 - the discovery of radio waves confirmed his theory and in the years that followed his work became the bedrock on which much of modern physics is built.

But, perhaps because unlike Newton and Einstein he died before he could see his ideas confirmed - he has never been given his true public recognition. He is now ranked with them as one of the three greatest physicists the world has ever seen, and fellow physicists over the years have paid glittering compliments. Richard Feynman said that in ten thousand years' time Maxwell's work would be seen as the most important event of the 19th century. Max Planck said that he achieved greatness unequalled: "His name stands magnificently over the portal of classical physics." Sir James Jeans said his physics was an enchanted fairyland where no one knew what was coming next.

"Visitors from many distant places come to visit his grave," says John Simpson who looks after Parton Kirk. "It might be visitors to a conference, hiring a bus to make the visit, or leading figures in digital companies, or just people who have admired his work all their life and want to see the land where he grew up and spent part of his later life. His name is known worldwide." 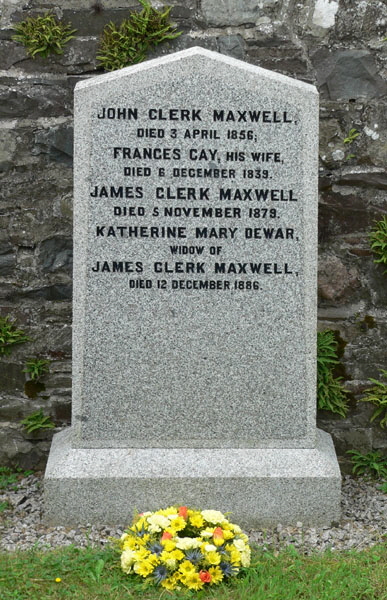 Parton Community Council have for years worked to highlight Maxwell's life and work and have now been spurred on further by the recent the news that the kirk is being made redundant by the Church of Scotland and put on the market.

"We were able to commission a feasibility study which showed that it has potential as a visitor centre on Maxwell's life and work and the influence of the land and people," says Community Council chair Paul Hodson. "The key question is financial viability and our next step is to seek funding for a project officer to work on this."

Strong support for the Community Council has come from the James Clerk Maxwell Foundation which looks after Maxwell's birthplace, 14 India Street in Edinburgh. "Momentum is building for two big anniversaries that lie ahead," says its chairman, physicist Dr Alan Walker. "We are already working on plans for 2031, which will be the 200th anniversary of his birth, and organisations across Scotland and internationally will be working together to commemorate it. Just two years before it, in 2029, will be the 150th anniversary of his death, and so there is a going to be a steadily increasing number of people travelling to Parton to visit his grave. A visitor centre at the kirk would help the area to cope with the numbers and indeed would have a national role. We have many connections and are keen to reach out and help the Community Council in every way."

The two organisations are collaborating in the plans for the lecture on November 5th, which it is hoped will become an annual event, bringing together local people and visitors alike to pay tribute to one of the greatest scientists of all time and reflect on the ways in which his life and work were influenced by the land and people of Galloway.

The lecture "Scotland's Einstein" is at 7.30 pm, with admission free.