In his Principia Mathematica (1687), Sir Isaac Newton gave the foundations of classical mechanics and gravity. Newton showed that his laws explained Kepler's Laws of planetary motion where the planet orbits are elliptical rather than circular.

In 'A Dynamical Theory of the Electromagnetic Field" (1865), Maxwell produced the first complete set of equations governing electricity and magnetism, expressed in terms of fields. In his electromagnetic wave theory he calculated the propagation speed in air using only the available data on its electric and magnetic properties. Comparing the velocity of the waves with the velocity of light he came to this remarkable conclusion: This velocity is so nearly that of light that it seems we have strong reason to conclude that light itself (including radiant heat and other radiations if any) is an electromagnetic disturbance in the form of waves. Maxwell's electromagnetic theory, and the resulting equations, were consequently the greatest advance in scientific knowledge since Newton's Principia.

Download our full-size wall panel 'Between Newton and Einstein..." by clicking on the image. 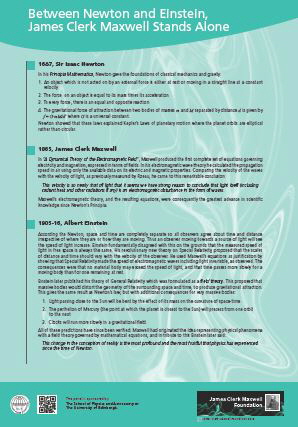 According the Newton, space and time are completely separate so all observers agree about time and distance irrespective of where they are or how they are moving. Thus an observer moving towards a source of light will see the speed of light increase. Albert Einstein fundamentally disagreed with this on the grounds that the measured speed of light in free space is always the same. His revolutionary new theory on Special Relativity, proposed that the scales of distance and time should vary with the velocity of the observer. He used Maxwell's equations as justification by showing that Special Relativity made the speed of electromagnetic waves including light invariable, as observed. Einstein later published his theory of General Relativity (1915) which was formulated as a field theory. Maxwell had originated the idea of representing physical phenomena with a field theory governed by mathematical equations, and in tribute to this Einstein later said: This change in the conception of reality is the most profound and the most fruitful that physics has experienced since the time of Newton.

In the early nineteenth century, despite many individual advances in knowledge, there was no inkling of a comprehensive theory of electricity and magnetism. In developing this, Maxwell pointed the way to the existence of the spectrum of electromagnetic radiation. Defining fields as a tension in the medium, he stated his belief in a new concept - that energy resides in fields as well as bodies. This pointed the way to the application of electromagnetic radiation for such present-day uses as radio, television, radar, microwaves and thermal imaging.

Maxwell made fundamental contributions to the development of thermodynamics. He was also a founder of the kinetic theory of gases. This theory provided the new subject of statistical physics, linking thermodynamics and mechanics, and is still widely used as a model for rarefied gases and plasmas.

The discovery of electromagnetic radiation led to the development of radio and infra-red telescopes, currently exploring the farthest reaches of space. His brilliant theoretical study of Saturn's rings provided a physical explanation of their properties, recently confirmed by a space probe vehicle. 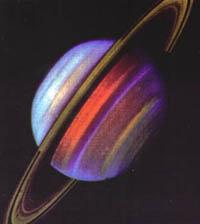 This is concerned with the investigation and interpretation of the flow behaviour of substances. It has many roles, extending to quality control, across industry (including the food industry) and in medicine. It can be traced back directly to Maxwell's pioneering theoretical and experimental work on topics, such as viscosity, which are strongly dependent on the molecular structure of free-flowing substances.

Maxwell's many interests included colour. He analysed the phenomenon of colour perception, which led him to invent the trichromatic process. Using red, green and blue filters, he produced the first colour photography - of a Scottish tartan ribbon shown here. This process was the forerunner of today's modern colour photography. See a video demonstration and ...MORE

Maxwell designed his dynamical top specifically for exhibiting the phenomena of the motion of a system of invariable form about a fixed point. The motion is exhibited by means of a coloured disc. See our video demonstration and ...MORE

James had a childhood collaboration with his cousin Jemima Wedderburn to produce early zoetrope animated images, and subsequent use of similar techniques to demonstrate scientific theory. See various video animations and ...MORE

Maxwell was the first to show how to calculate stresses in framed arch and suspension bridges. He also led the work of the British Association committee which defined most of the electrical units in use today; in the associated experiments he pioneered the use of feedback control.

His particular gift was the ability to see phenomena in terms of relationships which could be defined by equations, if necessary abandoning a physical analogy. He invented the term "curl" for the vector operator that appears in his equations for the electromagnetic field.

Calculating the speed of electromagnetic waves, Maxwell postulated that light is a form of electromagnetic radiation exerting pressure and carrying momentum. This provided the basis for Einstein's work on relativity from which the relationship between energy, mass and velocity contributed to the theory underlying the development of atomic energy.