This Resources section of our website includes details about some of Maxwell’s scientific achievements, links to audio and video resources and downloads of documents and papers by and about Maxwell.  Also here you will find the archive of Newsletters from the Foundation, and links to our affiliates and other websites relating to James Clerk Maxwell.  Please use the navigation bar to explore what we have.

Our image galleries are now located on a separate website.

It is also notable that Maxwell grew up in an environment where art was practised and appreciated.  His cousin Jemima Blackburn (nee Wedderburn) was herself a notable artist, and our knowledge of young James’s childhood is enhanced by the delightful watercolours which Jemima painted. His aunt, Jane Cay, was also an accomplished artist and two of her watercolours (one depicting Maxwell as a young boy) are on display in the Birthplace, as is a pastel portrait of Jane and her sister Frances (Maxwell’s mother) by their mother, Elizabeth Cay.  This artistic influence is further demonstrated by the fact that six relatives of Maxwell had portraits painted by the famous Scottish portrait painter, Sir Henry Raeburn (1756-1823).  These are:
Mother’s side
1.Frances Hodshon (Mrs. John Cay 1730-1804) – Tate Gallery, London (great grandmother)
2.Jane Hubbach (Mrs. John Liddell 1736-1805) – Hunterian Art Gallery, Glasgow  (another great grandmother)
3.Robert Hodshon Cay (1758-1810) – Museum of Fine Arts, Houston, USA (grandfather)
Father’s side
4.John Clerk of Eldin (1728-1812) – Currier Art museum, Manchester, New Hampshire, USA  (great grand uncle)
5.John Clerk (Lord Eldin 1757 -1832 ) – Scottish National Portrait Gallery  (son of great-grand-uncle = first cousin twice removed)
6.Sir John Clerk FRSE (1736-1798) and Lady Clerk – National Gallery of Ireland  (grand uncle)

It is interesting to speculate on the influence which these artistic connections may have had on Maxwell’s own work on light and the perception of colour. 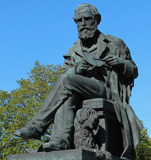 [Home] [About Maxwell] [Resources] [Birthplace and JCM Foundation] [Contact Us]